How does the ICE zone work?

Every term, Year 1/2 and 3/4 teachers from the DLPT meet and collaboratively plan this intensive curriculum. As a group, every foundation subject is discussed and planned meticulously to link with the children’s topic.  The teachers also take ownership of the unit and introduce the topics to the children at the beginning of every term. Throughout the term, the teachers have a continuously updated overview of how and what the children are learning.

Every day, the children in both Years 1/2 and  in Years 3/4 are split into two groups. One group stays with the class teacher and the other goes out into the ICE zone. Here they work with experienced TAs on their foundation subjects.

This half class is then split again, so half of the children go into our outside ICE zone area and half stay inside. Every single subject is spread across both ICE zones so they children receive the best experiences possible.

When there are no children in the ICE zone, our TAs come into class to help us or they work one on one with target children.

Yesterday, the 12th June, we invited our parents and carers in to share our learning fun!

Here are a few quotes from the day:

"It was nice to spend time with my son and see him having fun."

"It's nice to spend time with my child and share her learning experiences."

"Really nice to work together and see how proud he is of the school garden."

We would just like to say another huge thank you to everyone who attended our ICE zone open afternoon. We were overwhelmed with the support and our sensory garden is now really starting to take shape! 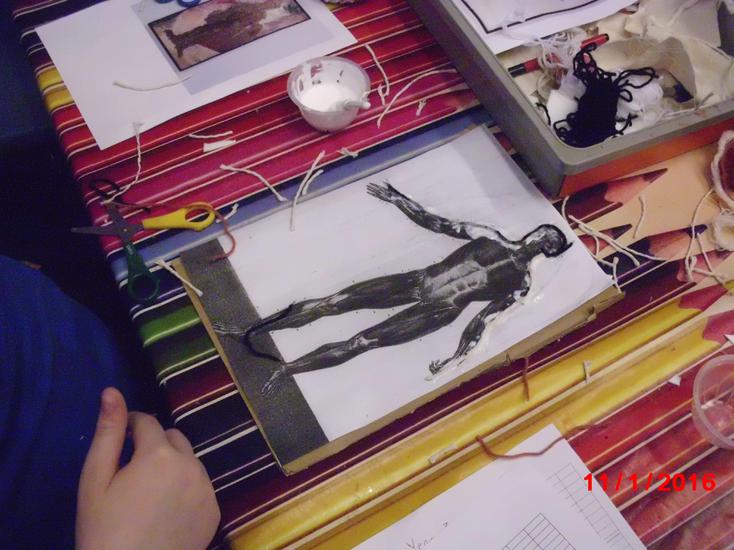 Year 3 and 4 have had a busy start this term in the ICE Zone!

We've had the opportunity to work with Mr. Cornell on collographs, and have done a fabulous job adding detail and colour into our work. We used skeletons to make imprints on paper using string and paint. We've come out with some fabulous pieces that we're really proud of!

In the ICE Zone, we've started a new topic: Anglo-Saxons! We are learning so much about their lives. We've been working on timelines chronicling invasions of Britain, comparing rich and poor Anglo-Saxons, writing diary entries from the perspective of an Anglo-Saxon, examining Anglo-Saxon artifacts, as well as working on our mapping skills. We have already accumulated lots of knowledge about our new topic and are very enthusiastic to continue learning more!

This term, the children in Year 3 and Year 4 have been learning about the Roman invasion of Britain in AD43 and its impact on the British way of life.

The topic began with an amazing 'Roman Day' when the children arrived at school in costume and took on Roman names to live life in first century Roman Britain in our school hall! 'History Off the Page' provided valuable learning opportunities for the children through a combination of role-play, practical activities and hands on experience with facsimile artefacts. The hall became the villa near a Roman occupied town where the children were busy working as apprentices, learning, making and trading crafts whilst sharing all the latest gossip as Romano-Britons. Workshops included testing oil lamps, charm bags, fresco painting, wax tablets, ink making, beauticians, potters, herbalists, mosaics and jewellers.

In the afternoon the hall was transformed again as the children prepared for the banquet at which food was served by slaves and there were performances by the children taking the roles of actors, dancers and soldier-athletes.

Following this inspirational taste of Roman Britain, the children were keen to research everything about the Romans and the ICE zone began to buzz with questions and answers about Roman food, clothes, schools, houses, villas, roads, baths, emperors, gods and even toilets! Fact files were written and more questions generated!

The role play area was transformed into a shrine where children learnt about the gods and wrote prayers for  help. Mosaics were researched, designed and re-created. Roman bread recipes were found and the smell of baking soon filled the area. Most children enjoyed the taste of the bread although the olive oil and basil was less popular!

We borrowed both genuine and replica Roman artefacts from St Neots museum for careful observational drawing and to help children understand how archaeologists can use artefacts to answer questions about the past. A parent even came in with her metal detector to show us how she has found coins.

The children were fascinated by Roman soldiers and were keen to research different aspects of the army. They designed Roman shields before constructing and decorating them; it was a real challenge to work out the best way to fix the handles on the back! Everyone had a huge amount of fun outside, practising marching to a beat and making formations such as the tortoise and the wedge. It was easy to see how the Romans were such formidable invaders and were able to impose their way of life on tribes such as the Iceni, led by Boudicca. 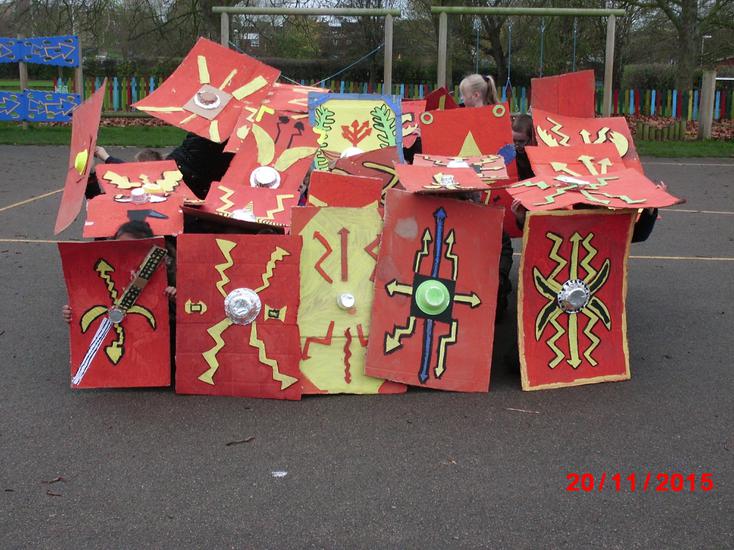 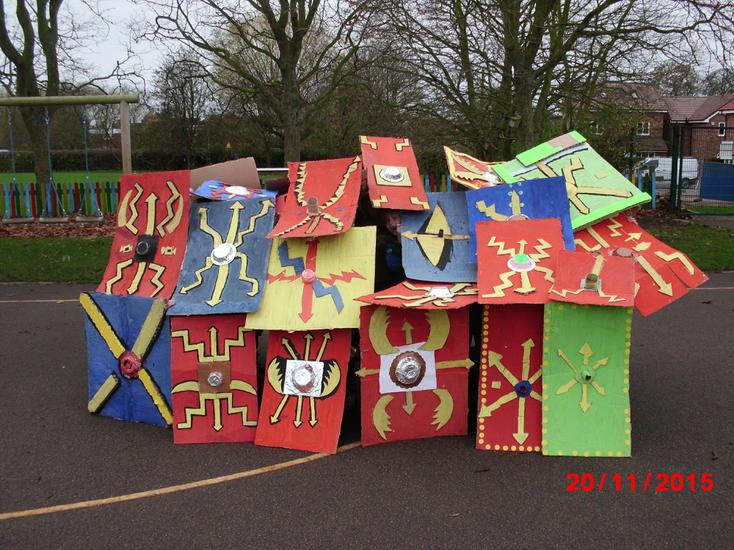 This term we are exploring the Egyptians, both ancient and current day.

Lower Phase ICE zone : Over the Spring term 2015 we are looking at Castles as our topic.

The children were entertained by the HOP leader, who grasped their attention throughout. During the morning the children had hands on experience; making a perfume bag, Illumination painting, pie making, lamp making, gargoyle sculpturing, soap making, visiting the Medicine lady and purse making. Some children got to go outside for Bow and arrow target practice, while others became Rat catchers!
The afternoon was very different. The children arrived in the hall with a gasp - it had been transformed into the banqueting hall of a castle.
The HOP leader discussed entertainment that took place and used children to demonstrate. Then adults took groups off to practice the entertainment that they had been given. After 15 mins we all returned to the hall and took our places up at the Banqueting table. Over time we were served with bread and cheese, wine (Blackcurrant juice) all served in goblets and wooden platters, during this each group took turns to entertain -  dancing, music, jugglers, jousters and rope walkers.
The HOP leader on leaving expressed that the children had been extremely well behaved and the adults had all worked well as a team.
The children, well, "I wish everyday was a Castle Day....." that sums it up!! 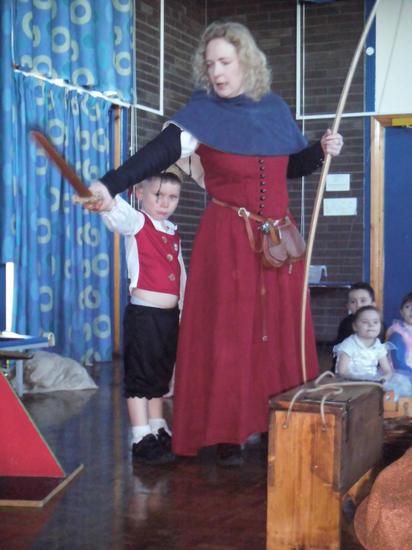 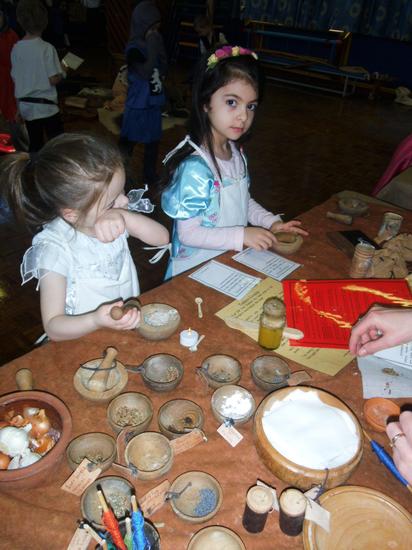 In the ICE zone the children are researching the structures of castles, the jobs in a castle and how the people lived. The role play area has been transformed in to the banqueting hall of the castle where the children can serve and entertain.

The children are designing and making siege equipment  in DT and looking at the structures of different castles to then design and make their own out of the wooden bricks/Lego.

In the Literacy area there is a "Knights of the Round Table" where the children can sit and write, as well as a Jesters Corner for donning a Jester's hat and writing jokes! In Merlin's cave the children have the opportunity to use the ' Read, Write Inc' sound cards to conjure up some fantastic words and sentences.

The maths area consists of the water table for capacity, the sand tray for mass and volume, along with the play dough area. There continues to be an area with games and activities connected to our class maths, such as the shop being set up while we are looking at money in our maths lessons. Outside the children are being Rat Catchers and making number sentences with the numbers that they find on the rats, as well as tallying and graph making with bird watching results.

Our topic for Science is 'Materials'. At the moment the children have been weaving inside and out with a variety of materials and discussing their properties.

The children look after the chickens along with being 'Winhill's Rangers' and taking on the role of maintaining their area and solving problems with how to look after our school and its grounds.

Medieval music is being listened to and the instruments heard are being discussed. The children are able to make up their own music with a variety of instruments and listen to and evaluate their own and other's work!

We have had our residential artist in, Mr Cornell, who has worked with the children on collage using pictures of buildings, especially castles. 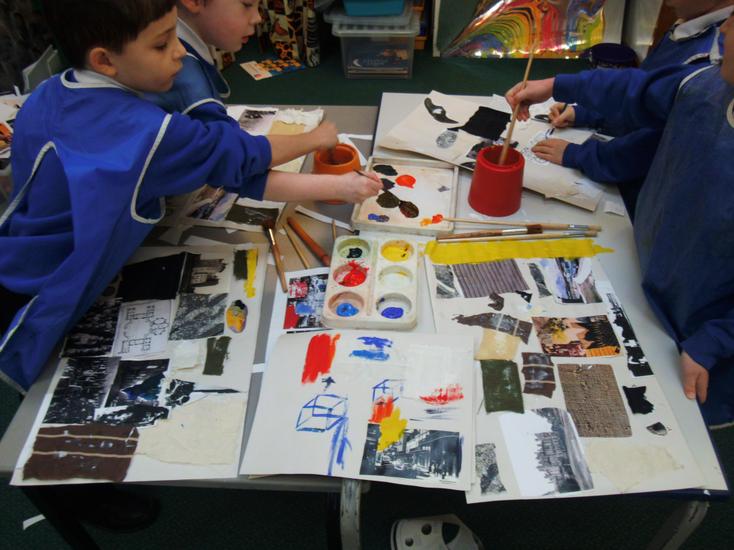